Loading...
You are here:  Home  >  From the On Pasture Library  >  Current Article

How to Body Condition Score Your Beef Herd

This article was originally published in February of 2015. It comes to us from the University of Nebraska Lincoln’s Beef website. Thanks to Dr. Rick Rasby for his excellent explanations! Be sure to scroll down to the bottom and check out the app that UNL created to help you practice your body condition scoring and to photograph and store information on individual animals.

The Look and Feel of Body Condition Scoring

Body condition scoring can be done using only visual indicators or a combination of visual and palpation of key bone structures for fat cover. Palpation can be done during routine processing of cows through a chute. The key areas for evaluation are the backbone, ribs, hips, pinbones, tailhead, and brisket. Palpating cows for fatness along the backbone, ribs, and tailhead will help refine your skill to visually access body condition.

If body condition scoring is new to you, just focus on separating cows into thin, moderate, and fat groups without worrying about the numerical score. With experience, you will connect the ”look and feel” of your cows to a body condition score that you can consistently determine.

Body condition scores should be recorded so that links to productivity and herd management (particularly nutritional management) can be examined. Several years of such information could reveal, for example, needed management changes for a given age group (i.e., thin three-year-olds) of cows or might identify a sire group of females that simply didn’t fit your resources. 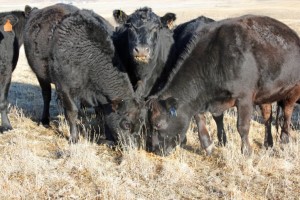 Cows in their winter coats. Photo courtesy of UNL Newsroom

When visually scoring body condition, you must “look through the hair coat”. Sometimes this is difficult due to a long winter hair coat. It is good training to re-evaluate your body condition scores when cattle are wet. You may be surprised at the impact hair coats can have on visual scores. Long, thick winter hair coats are obviously highly desirable (at least in the Northern plains), thus actual palpation for fatness of cows may be the best choice to produce consistent body condition scoring. Drawings of cows in BCS 1 to 9 can give an indication of how these cows would look if they were without hair.

When to Condition Score Cows

The greatest single factor influencing rebreeding performance of beef cows is body condition at calving, especially for spring-calving females. However, if producers wait until calving to manage body condition of their cows, they will find it very difficult and expensive to increase the body condition of a lactating cow.

Although evaluation of body condition can be looked at as an ongoing process, there are several key times when body condition scoring should be considered:

Late Summer Early Fall
This is an important time to condition score cows in drought years or in systems where females are managed almost entirely on vegetative or dormant grazed forage. If cows are thin, early weaning should be considered. Non-lactating cows may pick-up condition by grazing forage alone or by feeding a small amount of supplement along with the grazed forage. If young cows are thin and grass in the pasture is decreasing in nutrient quality, strategically wean calves.

Weaning Time
Pay particular attention to young cows weaning their first calves, as they are most likely to be thin at this time. For young cows, you may need to consider early weaning calves and giving cows access to higher quality forage.

45 Days after Weaning
This will give you a good idea how fast cows are “bouncing back” after weaning. Thin cows should be gaining back condition if cow type is matched with the feed resources.

90 Days before Calving
This is the last opportunity to get condition back on cows economically. This would be the time to separate thin cows from cows in good condition.

Calving Time
If cows are thin, producers may want to change the pre-calving feeding program. Because of the nutritional demands of lactation, it is difficult to get cows to condition economically after calving.

Beginning of Breeding Season
Thin cows at this time may indicate a poor match of calving season to feed sources. Maybe calving occurs too early in the spring. The period from weaning to 90 days pre-calving is the best time to get serious about body condition scoring and planning the nutrition/management program because the manager’s strategy can have great impact. The period from calving to re-breeding may help explain the productivity (or lack thereof!) but it is likely too late to have much impact on herd productivity and profitability at this point. If cows are thin management options include early weaning when the youngest calf is 45 days old or 48 hour calf separation. Both of these management techniques will help initiate estrous cycles in beef cows.

There’s an App For That!

The NUBeef-BCS app allows you to visually assess your cow herd and nutrition program using a number system that describes the amount of condition or fat reserve of the cow. When using the NUBeef-BCS app, producers can simply take photos of their beef cows and then score cows at important times throughout the year, such as at weaning, 80 days before the start of calving, at calving, and before the start of the breeding season. Photos and body condition assessments can be recorded throughout the year because the app allows for pictures at multiple times throughout the year. There is also a guide in the app to help the user condition score their herd.

Here’s a 1:49 minute video about what you’ll find in the app. NUBeef-BCS may be purchased and downloaded from Google Play and Apple App iStore.

NEXT ARTICLE →
Ideas for Additions to Your Pasture Forages

Kathy worked with the Bureau of Land Management for 12 years before founding Livestock for Landscapes in 2004. Her twelve years at the agency allowed her to pursue her goal of helping communities find ways to live profitably AND sustainably in their environment. She has been researching and working with livestock as a land management tool for over a decade. When she's not helping farmers, ranchers and land managers on-site, she writes articles, and books, and edits videos to help others turn their livestock into landscape managers.

View all articles by Kathy Voth »

What is the Best Cow?