This story comes to us from Civil Eats, a daily news source for critical thought about the American food system. In working on this story, reporter Caroline Abels contacted us at On Pasture to find out more about winter grazing and interviewed two On Pasture authors, Troy Bishopp and Jim Gerrish.

After an early season snowstorm in November 2014, Troy Bishopp had an epiphany that changed the way he approaches tending cattle. The longtime grass farmer and grazing advocate, who had recently launched a winter grazing experiment on his 100 acres in central New York, watched as the 60 dairy heifers he was contract grazing burrowed their faces into the nearly five inches of snow and tunneled down to chomp on the tall grasses sleeping below.

Witnessing the cows employ techniques once used by wild ruminants such as bison, elk, antelope, and bighorn sheep on the Great Plains and in the Rocky Mountain West, Bishopp realized his hypothesis was correct: he could indeed feed cattle for part of the winter without using hay.

“Over the last three or four years, I can safely say it’s become a habit,” Bishopp says—to graze cattle into November, December, and even January on grass grown out and left untouched (or stockpiled) during the summer and early fall. Most years, thanks to stockpiling, Bishopp adds about two months to his grazing season, which usually ends in mid-October when grasses begin to go dormant. After winter grazing ends, he feeds his cattle hay.

In a food system in which animal confinement is the norm, stockpile grazing is still a novel concept. Most industrial-scale farmers never let their ruminant animals—cows, sheep, and goats—onto pasture at all, let alone winter pasture. Pasture-based farmers, too, tend to feed their ruminants hay in barns in the winter, when there is no grass growth.

But now, an increasing number of livestock farmers and ranchers in many parts of the country are attempting to extend their grazing seasons into winter, according to Jim Gerrish, the Idaho grazing consultant who helped spark interest in winter grazing with his 2010 book Kick the Hay Habit. Proponents of winter grazing see it as a way to take advantage of ruminants’ natural proclivities and cut down on the resources required to raise the animals through the winter.

The practice originated back in the 1950s and 1960s, when a handful of prominent universities began researching it, Gerrish says. Because rural populations were in decline and labor was becoming scarce, livestock farmers were eager to limit the amount of physical work required to make hay. The introduction of the cool season perennial grass tall fescue in the 1930s, and its widespread use in agriculture by the 1950s, made winter grazing even more attractive, as tall fescue is believed to be among the best grasses for stockpiling.

By the late 1960s and into the 1970s, however, cheap fuel and innovations in hay-making machinery were beginning to swing the momentum away from grazing-based agriculture to harvested forage, Gerrish says.

“Today,” he says, “we have high-priced fuel and equipment and no labor, so the pendulum is swinging back to, ‘Let’s let the cows harvest it themselves.’”

Winter graziers list a number of benefits to the practice of stockpiling—saving money not least among them. Hay is a costly input for livestock farmers who buy other people’s bales, and if they make hay themselves, maintaining and fueling balers, mowers, and other machinery can be expensive, too (not to mention time intensive). As a contract grazier, Bishopp figures that over 10 days, he makes $720 if he grazes versus $360 if he feeds hay.

Profit considerations motivated Gabe Brown, whose ranch is located just outside Bismarck, North Dakota, to begin experimenting with winter grazing in 2006. “Any time you’re able to have your animals forage for themselves, you’re saving money,” he says. “It’s amazing what it does for our bottom line.”

Brown estimates that he saves $1 per cow per day when he winter grazes, which is significant given that he grazes about 1,000 head of grass-fed/grass-finished cattle. He occasionally provides hay during significant weather events, but generally feeds his cow herd less than 10 percent of the hay he used to. His yearlings, and any animals that will soon go for slaughter, are fed about 40 percent of the hay they used to receive before.

Brown also likes the idea of lowering his ranch’s carbon footprint by not using tractors to make hay for his cattle and his 250 sheep, all of which graze across 5,200 acres. In the past, he would use more than 1,250 gallons of diesel fuel each winter to feed hay to his animals. Even though he now has more animals than in the past, he uses less than 200 gallons each winter.

Brown has also noticed that his herd is healthier since he started moving the animals once or twice a week between winter paddocks, and he has not seen any decrease in reproductive efficiency. “I often tell people, these animals didn’t evolve in confinement; they evolved out grazing and doing what instinctually comes to them,” Brown says. “They’d prefer to do that.”

Winter graziers report that the practice also saves them time and effort. It’s a lot easier to move temporary fencing (and thus, animals) than to fire up a diesel tractor in the dead of winter and push hay into a barn. Farmers also don’t have to muck out their barns come spring if they’ve kept their animals outside all winter.

Despite the benefits, winter grazing presents a unique set of challenges. For one, geography can affect the success of stockpiling. The practice does not work well in places where rain or lack of frozen ground creates too much mud, causing animals to compact the soil through their trampling, or where extreme wind chills can threaten animals.

Additionally, if snow is very wet, and therefore heavy, or if there’s a coating of ice on the top, it can be challenging for animals to reach the grass without expending an inordinate amount of energy—and therefore requiring more feed. In such cases, or when excessive mud prevents a stockpiled field from being grazed, a farmer might temporarily feed hay. (Dairy cows, which have less fat on them to manage cold conditions, need more watchful management, according to Bishopp, and may need to be taken indoors earlier in the winter than beef cattle.)

The farmers and ranchers interviewed for this story stressed that humane treatment of their cattle includes not subjecting them to excessive cold and monitoring their body condition during winter grazing. “If we have an ice storm, we’ll do the humane thing and not make cattle chew through ice,” Brown says.

Even so, the amount of snowfall isn’t a limiting factor for some herds. “I’ve visited with ranchers in Canada who claim their beef cows will graze even in four feet of snow,” Gerrish says, though he notes that most ranch cattle in the American West only have the experience and ability to handle about two feet of snow.

In addition to staying attuned to their animals’ welfare, winter graziers must pay attention to environmental factors such as weather and pasture condition, and adjust their management as needed. To prevent animals from trampling the ground—and injuring plants and compacting unfrozen soil in the process—farmers must move animals between temporary paddocks in the winter, anywhere from daily to once a week, depending on the weather.

They also must have a summer grazing plan that keeps ruminant animals off tracts reserved for winter pasture—and enough acreage to do this. Finally, they must manage their winter forage to ensure high quality spring regrowth.

There is some research that indicates winter grazing can harm spring pasture, but Gerrish says the key to pasture health is “residual management”—making sure you move ruminants before they chew down the grass completely—and that you regularly rotate the pastures used for winter grazing. Bishopp says his winter pastures tend to come back lusher and earlier than his other pastures.

Bishopp, who chronicled his 2014 winter grazing experiment—including his late November epiphany—on his website, “The Grass Whisperer,” and through the news service On Pasture, says winter grazing in the Northeast is more challenging than in the drier West, because winter rainstorms and frequent freezing and thawing affect pasture nutrient levels, soil health, and animal access to grass.

“I’m stressed,” he admitted at one point in his write-up, “because I’m not in complete control, which is tough for me. You can see how decision-making needs to be flexible and why you need a few mentors or consultants to help you mull over these decisions and keep you from melting down.”

But all his planning in 2014 paid off: he grazed his neighbor’s dairy cows until January 1, two and a half months after the end of the traditional Northeast grazing season. During that time, he provided the cows with a fresh acre or two a day, on fields of mostly dormant orchard grass that had grown 10-16 inches tall (with some clovers and forbs in the understory). The following winter, he grazed cows until December 12.

Bishopp says he doesn’t know anyone grazing their animals outdoors for the entire winter, but he finds it an enticing goal. “We should try, and we should find out [from] the folks who are successful—find out what their secrets are,” he says. 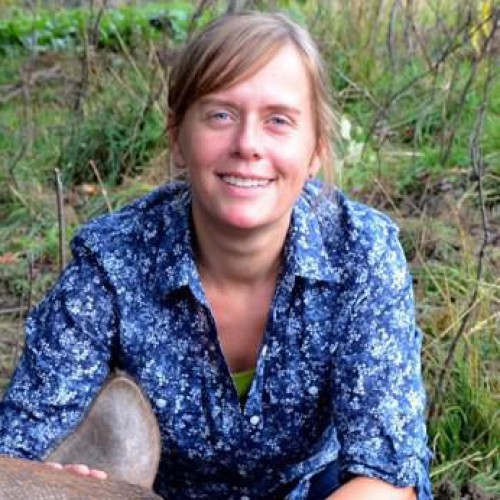 Caroline Abelshttp://carolineabels.net/
Caroline Abels is a journalist, essayist, and editor focusing on issues related to local agriculture and the humane treatment of farm animals. She lives in central Vermont, where she also practices Zen Buddhism. From 1997 to 2003, Caroline worked at the Pittsburgh Post-Gazette, where she was the paper’s first cultural arts reporter. Following that, she earned a master's degree in Environmental Advocacy and Organizing from Antioch University New England. Since 2007, she has been the founding editor of the quarterly magazine Vermont’s Local Banquet, which covers local food and farming issues. In 2011, she launched Humaneitarian, a website that inspires people to find and eat humanely raised meat. She is also a freelance editor, available to assist individuals and organizations with editing or writing projects, large or small. Her goal as a writer and editor is to produce work that is viscerally felt, meticulously investigated, and consistently honest. Caroline has worked on an organic dairy farm and two small-scale livestock farms in Vermont. In 2009, she joined with six other Vermont residents to establish the Vermont State House Food Garden, the first public vegetable garden planted on the lawn of an American state capitol in modern times.