How to Amplify Instincts in Your Working Dogs

As Denice described in Success With Stockdogs, instinct is an important part of working with your dog. Here she gives examples of how, as trainers, we can work with, and amplify, those instincts.

Ivy crawled through the squares of woven wire fence to begin working livestock at 13 weeks old.  This was her first step toward becoming a working Border Collie. She and her litter mates had been crawling through to play in the pasture that bordered the yard for weeks, previously showing only a passing interest in the sheep. This day was different, a light had come on. I stepped out of the house to find her inside the pasture, in perfect Border Collie form gathering the flock moving them toward the house. Ivy was as serious as a heart attack in the chilly April rain.

In this unauthorized working session, every move she makes is due to instinct. Both her parents work in my sheep operation.  Ivy is an unusual marked registered tri-colored, smooth coat Border Collie but her movements show the traditional style of the breed.

Border Collies naturally go the head of livestock to control their movement, are capable of large sweeping gathers and want to bring stock to their handler.  You can see Ivy goes around this entire group of sheep keeping them together, working them as a whole.  She is serious, not playing, indicated by her posture; head and tail down.  When she is worried, concerned, uncertain you see her tail and head come up.  Both lower when she is again moving confidently into or around the flock, thinking and following her instincts.

I would not have chosen the group of ewes with young lambs to start a pup since one ewe is exhibiting threatening behavior, coming out of the group toward the pup and stomping.  Ivy is handling it well, already deciding to try to avoid her and work from another angle, not scared but cautious. Once she is more confident I would want her to walk into that ewe making the sheep turn. Teaching the ewe to respect a dog. I will not ask her to do that until I can help her be successful.

More commonly pups begin like Macy who is shown on sheep here when she was just a bit younger than Ivy. Most Border Collies first instinct is to circle the stock, keeping them together.  This video was taken on the first day she had seen sheep since she left at 8 weeks old.

Ivy decided that rainy day in April was the day she would begin her career as a working dog. The next lesson will be teaching her to call off sheep, the first time every time. Once we have that, I will begin to work with her, helping her to see livestock work is a team effort. She will begin to change her position relative to where the handler is as Mae is doing in this video –   keeping stock close to Lorna. This is a combination of instinct, pressure and release with movements similar to those of lounging a horse in a round pen using only our movement to ask for changes in direction.

The lessons that follow are a series of small steps forward, slowly exposing pups to all the skills they will need to know to grow up to be a useful farm dog.  I hope to bring out instincts, keep them thinking while working, use verbal correction to let them know when they’re wrong and to encourage them when they are trying and when correct. I then put words to all movement once they are confident and consistent.

But on that April day I was very pleased Ivy was showing nice thoughtful movements, even if it was an unauthorized work session in the rain.

Denice is available to help you learn to work with your stockdogs. You might also consider attending her SARE sponsored workshop, Success With Stockdogs:

Yes! I Can Help!
Facebook
Twitter
Pinterest
WhatsApp
Previous article
On Pasture Will Have You Singing All Day Long
Next article
Does Grazing Sequester Carbon? Part 1 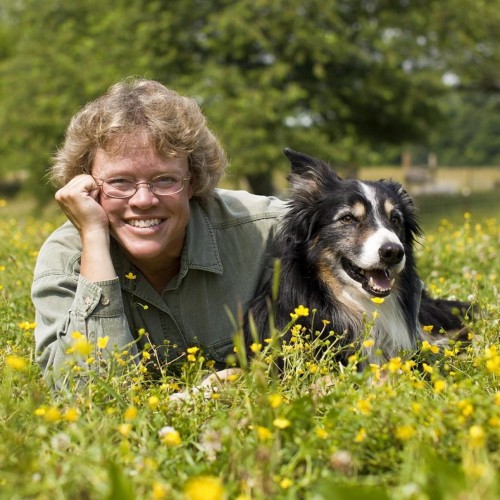 Denice Rackleyhttp://www.clearfieldstockdogs.com
Denice Rackley's life seems to have always been connected to animals. Degreed in biology and veterinary technology she has owned her own dog grooming business, worked as a obedience trainer and veterinary technician. Denice added freelance writer to her list of occupations a couple years ago. She is a regular contributor to ACRES USA and SHEEP! and has written for other publications, web sites and blogs. She has run a commercial sheep operation since the mid-1990's. Her flock has included many breeds but is predominately a grass based program with North Country Cheviot ewes managed with the help of her Border Collies. She purchased her first dog as a pup in 2000 to assist with her growing flock. Her passion has become educating livestock producers to the vast benefits of stockdogs, teaching them how to use and incorporate dogs into their operations. Denice raises and trains working Border Collies and organizes clinics, gives lessons and demonstrations. She feels there is no better partner for livestock management than a natural, thoughtful working dog. More info at www.clearfieldstockdogs.com