How to Successfully Go Solar on Your Electric Fencing

Like many of us, Dean Schneider of Bell Rule Genetics, wasn’t satisfied with the performance of the typical all-in-one solar charged fencers he’d tried. But since there is no electrical power at the place he’s running his cattle, solar was his only option. Last October, we shared the system he put together that turned out to be very effective. This week, he shares more about his systems and how they’re working to power miles of fence, even with a heavy weed load. We think it could be a recipe for success for lots of On Pasture readers!

Awhile back, Kathy asked me if I could give an update on our permanent solar fencer installations. I got busy, life happens, so I’m now getting around to it. (Speaking of Kathy, I would like to thank her for the work she does providing us with tons of pertinent information and join her in asking you to support On Pasture if you are able). Now, back to the fencers. We have installed two permanent solar fence setups in the past year or so. The first installation was built with a DC 6 joule charger, a charge controller, battery, and a 100 watt solar panel. The second setup uses a 110 volt 8 joule charger, charge controller, battery, DC to AC inverter, and a 100 watt solar panel. I will explain each a little further and go over what we have learned thus far.

The first setup was installed about 12 months ago. It is currently running about 3 miles of single strand wire. We live in a fairly high rainfall area, so consequently we have pretty good weed pressure on the fence through the summer. We have not had to do any mowing under the wire and it has kept power up around 7,000 volts routinely.

For this installation, we purchased a 6 joule DC powered fencer as we felt it would be simpler than trying to use an inverter to go to AC. The solar panel was mounted on the side of a hay barn that faces straight east and west. There is a tree to the east and more trees further away to the west. We thought the east one was far enough away that it wouldn’t bother. But during the winter, it will shade the panel until 9-9:30. The trees off to the west will begin to shade the panel at about 4 PM in the winter. In mid summer, we found that the barn actually shades the panel for early morning sunlight. However we still get sun from about 8-8. This has led to our only problem we have encountered so far. Once every 1-2 months our charge controller will be kicked off and cut power to the charger. I think this is due to the battery charge and output voltage falling too low, thus causing the controller to cut output power to protect the fence charger. We have the charger hooked to the output terminals on the charge controller and I think we can get around this issue by hooking the charger directly to the battery. Then it won’t be shut off by the controller. As I said, this has been a minor issue. Thus, we haven’t taken the ten minutes to change the wires and do something about it. Overall, we have been satisfied with this setup. At some point, we will probably move the solar panel to the roof of the barn to eliminate the sun blockage issues we are having.

The second setup was installed about 5 months ago. It is currently only running about one and a half miles of single strand fence. However, it too has had significant weed pressure. In the future this system will be increased to 3-4 miles. After talking to the salesman at the solar supply business, we decided to use an inverter and an older 110 volt AC charger that we already had sitting around. He told me that the new inverters were very efficient and trouble free, so this saved us from having to purchase a new DC charger. We mounted the solar panel on a brace post out in the middle of the field to keep it a ways from possible thieves and vandals. The panel itself is mounted onto an old satellite dish frame which allows us to do some angle adjustments to maximize direct sunlight. Both setups were done this way and so far we have not adjusted either. This panel is in a wide-open area and thus there is no shading problem whatsoever. The setup has performed flawlessly and puts out 8-9000 volts consistently.

We put this two minute video together to show you what it looks like. (Sorry for the wind noise.)

In summary, we are very pleased with our permanent solar electric fence systems. I wish I could say the same about our smaller portable units! My only real suggestion is to spend a little time and map out your sunlight hours where your installation is going to be so that you avoid shading problems from the get go. We will definitely do more systems like this in the future if the situation and need arises. They have been a very cost effective and trouble-free part of our rotational grazing system.

Our next project is going to be a solar water pumping trailer so that we can get higher quality water to underutilized sections of our ranch. The panels and pump are sitting on the porch as I type. Now we just have to get it built! Wish us luck and we will keep you posted.

Bell Rule Genetics is holding its annual sale on November 9, 2019 at the ranch in Adair, Oklahoma. You can check out their stock of Angus, Senepol and Senegus bulls and females, and learn more about the management that makes Dean successful. Visit their web site to learn more. 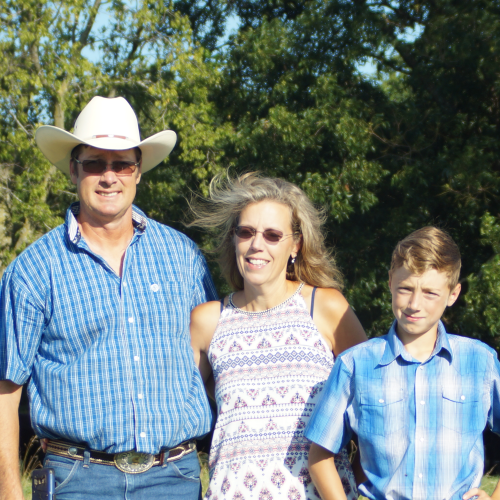 Dean Schneiderhttps://bellrule.com
I am part of Bell Rule Genetics, a family Ranching Operation in Northeast Oklahoma with 400 commercial cows and 100 registered Angus cows. We have been raising cattle for over 100 years. Our focus is on producing cattle that are efficient, productive and fit the needs of today's Beef Industry. At Bell Rule, we have built our Registered Angus Herd with the commercial cattlemen in mind. They are based on moderate framed, easy fleshing, maternal cattle with carcass capabilities.﻿﻿ Currently we raise Registered Angus bulls, commercial bred heifers and cows, feeder cattle and fed cattle for local butcher shops and premium age and sourced programs. In addition, we have a select herd of Foundation bred Quarter Horses.