About three years ago, I decided I would try my hand at raising some purchased stocker calves. I had kept brood cows on several different farms around my part of central North Carolina for over 10 years, and I was ready to try something new. I had run the numbers on stockers several times over the years, and on paper it always seemed like they would provide a pretty good return. However, there was always some reason why it wasn’t a good time to actually go for it, mainly that my pastures were full of cows and I had no room for any additional cattle.

In the spring of 2017 I quit making my own hay and I sold all of my hay equipment. I had one farm that I was just using to make hay on, mostly winter annuals in the spring and volunteer warm season grasses in the summer. I put some replacement heifers on this farm over the summer after selling my hay equipment. The following fall, I sold the heifers, planted the place in winter annuals, and used the money from selling the hay equipment to buy some steers to carry over the winter.

Fast forward a few years to today. I have now sold all of my brood cows, most of the equipment that I had left, and am running all stocker cattle. The calves I was selling off my own cows were barely bringing in enough to pay the cost of keeping the cows up all year. I’ve found that, in a lower priced cattle market, stockers provide a lot more opportunities to make a profit than cows do, at least in my area.

One of the reasons I was struggling to make a profit with cows was winter feed costs. July through early October is typically pretty hot and dry here. It’s hard to stockpile much winter forage if you have a cow herd eating the grass down this time of year. That meant, I usually fed hay for 60 days from mid August to mid October to try to keep the cows off the pasture so it could grow. My stockpile would then typically last from mid October to mid January, when I would start feeding hay again until the end of March. By mid May, my pastures had way more grass in them than the cows could eat, so I would mow and bale it to feed the next year. I was not happy with this system, and figured there had to be better way.

After my first set of stocker calves made a little money, I wondered if I could run stockers on perennial pastures as successfully as on the annual pastures I was planting. My pastures are Kentucky 31 fescue-based, but they have a lot of white clover, orchardgrass, some bluegrass, and several species of volunteer warm season grasses in them as well.

A lot of articles I read said that stocker calves wouldn’t work on fescue. I kept digging, and found Dr. Gordon Hazard’s book, “Thoughts and Advice From an Old Cattleman.” He grazed steers on fescue-based pastures profitably for many years. Dr. Hazard’s approach was to buy calves in the fall, winter them on fescue, and sell them the next summer. I gave this method a try, and liked it even better than using winter annuals. My calves didn’t gain as much on the fescue-based pasture, but they ended up making more money with less work involved because I didn’t have to plant everything they ate and feed them until it was ready to graze. I just bought the calves in late October and strip grazed them on stockpiled fescue until the following spring.

I sold the rest of my cows, and let all my pastures grow through the late summer and fall to stockpile winter forage. This prevented overgrazing during a normally stressful period on the grass, and allowed enough cover to capture any rainfall that we did have. When the temperatures cooled off and rain started coming more frequently, the grass took off growing.

Lots of Options for Profit With Stockers

Stocker cattle give you a lot more opportunity to turn your money over than cows do. When you buy a cow, she’s on your books for one year up to fifteen years. She may or may not give you a calf each of these years, and that calf may or may not pay for her upkeep that year. When you buy stockers, you keep him (or her) for two to nine months. You sell the calf, get the money you paid for it back, buy another calf, and have some money left over.

There are a lot of options and ways to add value to stockers, and do it in a way that maximizes use of your forage resources while minimizing purchased feed. It takes a lot less time to recoup your up front investment for a group of stockers than it does a herd of brood cows, making it an excellent option for someone who wants to get started in cattle but doesn’t have the money to buy a herd of cows and pay the expenses until their calves are sold. In addition to all of this, you can keep about two calves on the same amount of land required by one cow.

Stocker calves are not without challenge, however. Possibly the hardest part about them is that they are likely to get sick during the first few weeks you have them, especially if they weren’t weaned or vaccinated when you bought them and if they came from a sale barn. With good animal husbandry, good nutrition, a good vaccination program, and judicious use of antibiotics when necessary, you can usually manage to get them healthy and gaining weight pretty quickly. If you are interested in a program that doesn’t use antibiotics, buying weaned, vaccinated cattle straight off the farm is probably a good idea. Other risks, such as the market can be managed. I believe the benefits of running a stocker operation far outweigh the challenges.

Stockers have been a great way to add value to my grass, improve my pastures, and make more money from my land resources. I can spend more time away from the farm, because I’m not making hay all summer and feeding it all winter. Additionally, there are times of the year when I sell out and don’t have any cattle to take care of, allowing me to get away from the farm without worrying about who will take care of the cows. This has turned out to be a pretty good enterprise, one that I enjoy and hope to continue growing.

Read the next in the series: Planning for a Stocker Operation- Homework to Do If You’re Considering This Option.

Yes! I Can Help!
Facebook
Twitter
Pinterest
WhatsApp
Previous article
Ask For the Romance You Want
Next article
How a Blue Ridge Farmer Set Up His Rotational Grazing System 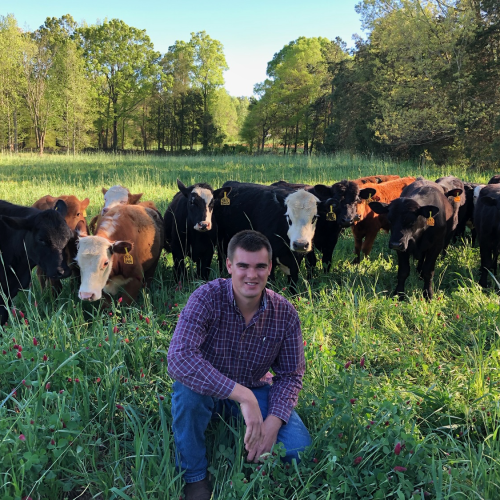 Blake Allen
I was born and raised in Charlotte, North Carolina, however my dad and his brothers still owned the family farm where they were raised about 30 minutes from our house. I spent most of my weekends and summers growing up helping various family members and friends on their farms. I became interested in buying some cattle of my own when I was about 13, so dad and I rebuilt the fences and cleared off the overgrown brush on our farm. When I was a freshman in high school, I bought my first 10 cows with money I had saved over the years. We kept about 60 brood cows between the two of us, made hay all summer, fed hay all winter, and lost money all year like most folks around us did. I graduated from North Carolina State University with a degree in Agricultural Business Management in 2017, a couple of years after losing my father to cancer. Since then I have restructured my operation into one that focuses on buying livestock that will increase in value with good forage and a little management, and have found much more satisfaction through this method than I did with our old ways.