I Couldn’t See the Forest…or the Water, For the Trees

After digging a well and running polyethylene tubing all over the place, my intensive grazing operation was humming right along. Cows never needed to walk more than two or three hundred feet to water and things looked pretty sweet.

Then the water problem started.

During a dry spell my well struggled to supply sufficient water for the herd and as the drought deepened the well teetered on the brink of extinction. I tried everything to revive that hole. First, injections and changing pumps and plumbing. Then praying, cussing, incantations, tirades, stomping, and throwing things. No dice.

The enduring image of the American cowboy is a picture of self-reliance, resourcefulness, and rugged individualism. That’s to say, a cattleman fixes his own problems. So, when faced with an issue we often rely on our own library of solutions.

My limited library provided no solutions, however, so contrary to my independent, self-reliant ways, I sought out experts for assistance to fix my water well. Not getting much traction locally for the answers I sought, I finally contacted someone with an online grazing magazine (a woman no less!) and she talked me through the water issue before directing me to a few agencies that might help. (At that point I was still thinking “well problem,” not “water problem.”)

Now, when I ask someone to help me fix something, nothing steams me more than them finding the breaker tripped, or that I needed to shift the transmission to neutral first, or that something only works if you press the “release” and “start” buttons at the same time – simple fixes like that. So, before I called any expert at one of these agencies I decided to get all of my ducks in a row so I could avoid any of those ‘gotcha’ kind of scenarios.

What was the first thing I needed to do? I guess, initially, I would need to state my problem to these guys:

Actually, “We need water for my cows.”

“We need water delivered to cattle in multiple locations.”

“We need clean water delivered to cattle in multiple locations.”

“We need 500 gallons per day of clean water delivered to cattle in multiple locations across the ranch.”

Next, they would probably ask me about sources of water on my place. Let’s see. There’s that 40-foot concrete hole that used to contain lots of water. Also, three stock tanks (ponds) sit on our place, but I don’t really cotton to using those due to their cleanliness, or lack thereof. Hmmm. I remember reading someone saying they used water caught by terraces. Terraces cover a lot of this ranch. I add that to my list. Now, where else do I see water?

I suppose I could consider county water since lines run to the barn and the house. It wouldn’t take much to hook that to my water line network although that water incurs an expense.

What about rain? Some folks capture rain off the roof somehow. One inch of rain on my barn makes a little more than 900 gallons. That requires some gutters, a tank and piping. But my aesthetics critic/wife gave that the thumbs down, so I’ll table that for now.

And what about rain in the pasture? Grass doesn’t use all of it does it? I saw a report saying that a ten foot mesquite tree drinks ten gallons of water per day, regardless of the weather. Within 300 yards of the water well I estimate upwards of 400 mesquite trees. Gosh, that’s 4,000 gallons per day!

While looking for that one silver bullet I think I discovered a combination of issues and solutions. So, before getting any further outside help I figured I ought to go ahead and put some of these ideas into play.

For starters, over the Winter I cut down hundreds of mesquite trees and treated the stumps to prevent regrowth. Shade from a mesquite tree? Like virtue from a pool hall. Not enough to cover a reel of polywire. Now, I just wait for all that water to roll in.

Meanwhile, I started grazing in the Spring with the cattle getting 17 days of drinking water from terraces. With all the terraces grass-bottomed it proved a pretty clean source of H2O.

With a temporary fence I sort of controlled cattle access to my tanks and let them drink from there for a total of around 14 days. My rather sloppy exclusion fence still resulted in muddy water, though.

Also, I decided to suck it up and connect my grazing water lines to the county water for a short time. An interesting side note: the county water line produces quite a bit more pressure than my well, revealing some weaknesses in my polyethylene grid. Once I repaired all the blow outs, things proceeded smoothly.

But, the real triumph? After many months my water well finally came back online even though we continued to wrestle with drought. Cutting all those trees really worked? Sometimes things just happen? Hand of God? Shoot, I don’t know. I tell you, though; I’m vigilant making sure none of those trees grow back and I make certain to kick a little into the offering plate every Sunday.

Well, it turns out I could solve my own problem. Hmmm. You reckon that girl at the online grazing magazine just wanted me to think a little to see if… 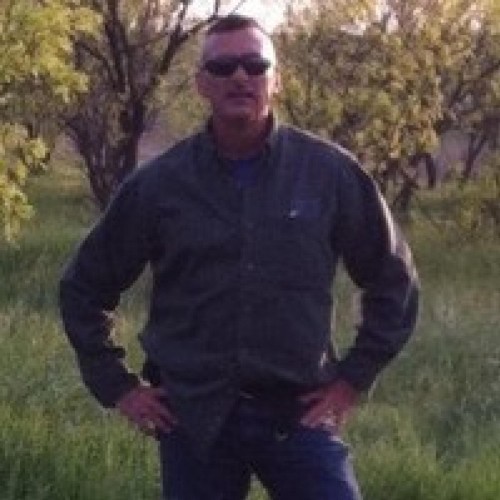 Luke Jessup
Luke, a graduate of Western Kentucky University, runs a cow-calf operation in Kiowa County, Oklahoma and keeps a fulltime job at a paper mill. In a previous life he enjoyed vacations in Iraq and Afghanistan courtesy of your United States Army. His wife Kimberly, a nurse, sometimes performs as his veterinarian and with daughter Amy periodically helps Luke out of jams. They contend that he is not nearly as smart or as funny as he thinks.