Adapting to Drought – Lessons and Alternative Forage That Lead to Success

In 2012 my wife and I, and our two young daughters, embarked on a new and exciting side venture in the cattle industry with the help of a friend who had many years of experience. I outlined several lessons learned in my first article for On Pasture. In a follow-up, I shared more details on my path through drought as a beginning grazier. Kathy is running this article again because, not only is it helpful for times of drought, it also points out a valuable forage we can take advantage of when hay is high priced or hard to come by.

As misfortune would have it, 2012 challenged us with a historic drought and unbearable heat not common to North Missouri. Our new venture began, almost immediately, with us feeding hay in mid-summer as we ran out of grass. If not for government assistance we would’ve lost money in our first year! In fact, we went on to lose money in four of our first five years with the one profitable year being a boon in the market on steers. Luckily that one good year put us in the black on the financials.

I still remember the day our first load of steers arrived and the excitement we all felt. I’d be lying if I said I didn’t feel a little fear, to boot. We had no idea what we were doing and were completely dependent on our partner to show us the way. We took a family trip to Yellowstone that June while our partner took care of the new cattle. As we descended from the mountains in Colorado in mid-June the temperature rose to over 90 degrees. Having already been dry at home all spring I began to realize we may be in trouble.

In July, temperatures soared to nearly 110 degrees and the air was extremely dry by Missouri standards. The average temperature for the month of July in 2012 was 97 degrees and we had just 1” of rain for the month! With June being just slightly cooler and slightly more rain, it was evident that we were in trouble. August brought us little change and the summer was really wearing on our emotions.

How We Dealt With Extreme Heat and Drought

Although we still had some grass, we felt it was a good idea to take some pressure off so we began feeding hay. Our partner had plenty of hay at his own cattle operation so we were fortunate in that regard. What was problematic is that we had zero quality forage until September. So, not only did we incur a small cost in hay, but we also began feeding grain to supplement protein and energy. To minimize our grain cost we cut down Honey Locusts along the edge of our pastures to give the steers a quality forage. Looking back, this was actually a great experience! They loved the leaves from the fallen trees. Then the following year they loved the leaves from the regrowth. And there we learned something positive! (Check out this article for more ways to use Honey Locust.)

What We Learned From the Experience

While a historic drought put us in the red in our very first year of backgrounding steers, there were lots of “ah ha”s and “never again”s to learn from. The aforementioned realization that Honey Locust is a high-quality forage which cattle absolutely love was a great lesson. Others include:

What We Are Doing Differently These Days

In 2017, with the blessing of our partner, we began to change our operation. We were granted an EQIP contract to help us with water, rotational grazing, restricted areas, timber stand improvement, and a pollinator plot.

In 2018 we experienced, arguably, a worse drought than 2012. This time we were ready! We had 25% of our pastures in summer annuals as we attempted to terminate Fescue-based pasture. Here we learned another lesson: Sorghum Sudangrass loves hot and dry! We were able to graze these acres through September leaving our cool season grass pastures relatively untouched until the rains fell and grass began to grow in late summer.

Furthering our goals of profitability and sustainability on our own dime, we are converting some of our pastures to diverse natives (cool season grasses, warm season grasses, forbs and legumes) and developing silvopastures. These measures will surely help us get through future droughts.

Currently, we are grain free and plan to stay that way. Inputs like grain, dewormer and passes with a tractor pulling a brushhog have not translated to profit at the sale barn. Keeping that money and improving our pastures with our cattle has made us a more profitable operation. Leaving the forage stand taller at all times is a key to healthier pasture, healthy pasture is a key to healthier livestock and healthy livestock is a key to our sanity!

We want to take this opportunity to thank Jim Bonderer for 7 years of showing us the way and for his support as we transitioned to a new way. Also, we would like to thank the staff at NRCS, Soil and Water Conservation District of Livingston County in Missouri and Quail Forever. Each of you have been instrumental in our cattle operation and we look forward a continued relationship.

Yes! I Can Help!
Facebook
Twitter
Pinterest
WhatsApp
Previous article
Creating a Grazing Plan to Deal With Drought and/or High Hay Prices
Next article
Creating an Information System to Get You Where You’re Going 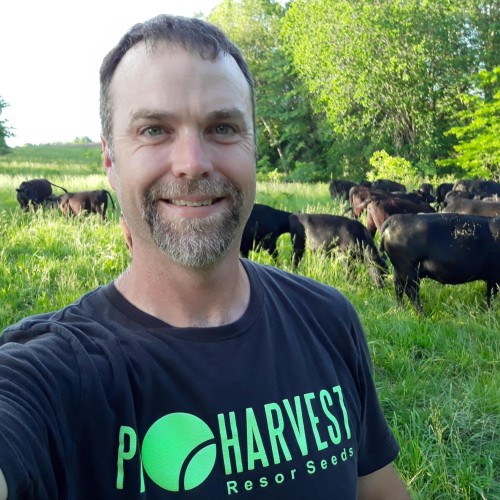 Chad Fisher
Chad and Emily, with their daughters Anna and Clara, are relatively new cattle grazers in Chillicothe, Missouri. In the past three years they have been in the process of transitioning their farm from a traditional grazing operation to one which focuses on holistic and regenerative practices. Chad and Emily both have 17 plus years of experience in Environmental Consulting and Remediation but three years ago Chad left that industry and is now in the seed business. His focus there primarily is on soil health, livestock forage and cover crops as he learns more about corn and soybeans.