For many vegetable farmers and gardeners, there’s something supremely satisfying about a cleanly tilled field in spring. It represents a new beginning. The weeds haven’t started growing yet, the soil is fluffy, and it’s easy to put seeds and transplants in the ground. Despite the short-term benefits of tillage that can help vegetable crops grow, tillage takes a toll on soil health by destroying soil aggregates, making soil susceptible to erosion, compacting subsoil, and “burning up” organic matter. The more you till a soil, the more it needs tillage to get back to that temporary fluffy state. Targeted use of cover crops can break this cycle of tillage, creating windows for no-till production that can rebuild soil health over time.

For the last three years, we’ve had success at the University of Maryland and with participating farmers with no-till seeding early vegetables like spinach, peas, and beets into a winterkilled forage radish (Raphanus sativus L.) cover crop without the use of herbicides. The inspiration for this work came from previous research on forage radish in agronomic systems that showed its roots have the ability to penetrate compacted soil layers, its dense fall canopy can suppress nearly all early spring annual weeds, and its residue decomposes rapidly in spring, leaving a nearly bare seedbed full of nutrients.

Conscientious farmers and soil scientists alike may cringe at the thought of bare soil (aren’t we supposed to keep it covered?), but this aspect of the seedbed after forage radish is an essential component of its ability to replace tillage. Cold, wet soils in spring can hinder crop production and field work, and the relative lack of residue after forage radish allows the surface soil to warm up and dry out, creating a hospitable environment for vegetable seed germination. Lower soil water content also reduces the potential for soil compaction from driving on the field if a tractor is used for seeding. (On Pasture has also covered the use of radishes as pasture improvement and forage.)

After concluding that no-till seeding early vegetables after forage radish is an effective crop production strategy in the mid-Atlantic, I took this system north to Maine, where soil warming in spring is an even bigger concern. This year, there was snow on the ground well into April. In agricultural research, we like to see something work more than once and under many different conditions before we arrive at conclusions, but I will say that I am encouraged by my no-till seeded spinach and peas, and even my no-till carrots in the sandy soil at my one site in Maine. This may be a no-till technique that works for some vegetable crops in some soils in northern climates where cold soils can really hinder crop growth.

High-residue cover crops, like a rye-vetch combination, overwinter and continue to put on a lot of biomass in spring. As the cover crops begin to flower, they can be killed mechanically. The resulting mulch suppresses weeds and keeps moisture in the soil. Finding the right balance between rye, which suppresses weeds effectively but ties up nitrogen, and vetch, which doesn’t suppress weeds well but makes nitrogen available, can be tricky. This system can be effective for later-planted tomatoes, Brassicas, and other transplanted crops in the mid-Atlantic.

More details on the do’s and don’ts, the lessons we learned, forage radish, and cover crops and no-till vegetable production can be found at our website www.notillveggies.org. 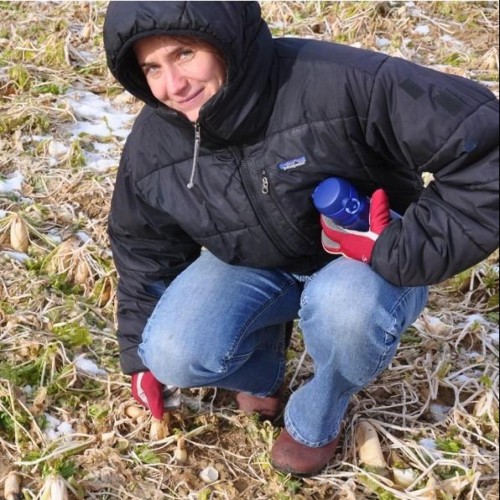 Natalie Lounsburyhttp://www.notillveggies.com
Natalie is related by research to On Pasture editor Rachel Gilker, having studied soil science with Ray Weil at the University of Maryland. She was responsible for tossing hundreds of gravel samples leftover from Rachel's research, and then quickly filled the shelf space with samples from her own research on cover crops and no-till vegetable production in organic systems. After a few years in Maryland, she moved back to Maine where she farms along the Androscoggin River and continues to do research and outreach. For more fun, she writes for www.notillveggies.org