The Economics of Being Earnest About Low Stress Handling

Most people I have met would say they handle their livestock in a low stress manner. What this actually means varies from person to person. To me, if you are a successful handler, you are able to turn your animals to the right, turn them to the left, slow them down, speed them up, and stop them. If you are real good, you can spot them in one place and they will stay. I am still working on being real good! The herd of cows I currently work with will turn both directions and change speed when given the proper signal.

Recently the economic benefit of being able to handle a herd in this manner became very apparent.

For the last two and a half years I have been working on a ranch where we experience frequent chinooks. I love chinooks because they melt the snow over the grass we stockpiled during the summer/fall and we can go back to grazing. The problem with chinooks, however, is that there is a lot of water lying around that turns to ice when the temperature drops again. Travel becomes treacherous for human and beast.

The other day, I wanted to move the cows (353 head) back to the bale grazing paddock because a significant blizzard was in the forecast. No big deal, except for the ice! The herd had to travel 1.5 miles across a mine field of ice and they were not too keen to leave the safe paddock they were in. This meant they would not follow me past the gate when I blew the whistle that they’re trained to come to. No problem, I thought. I would just drive them to the bale grazing.

Initiating movement for the drive was easy. Unfortunately, they started to circle past the gate. I carefully ran to the other side of the herd and initiated movement in the opposite direction. The idea was to get opposing momentum that would meet at the gate then push some cows through the gate because there was nowhere else to go. On the second attempt, the herd popped through the gate and down the temporary alley.

The next hurdle was getting them over a large patch of ice and into the next paddock. The herd stalled at the ice as anticipated, so I had to create some energy without scattering the cows. To create energy, I started to holler ‘Hup! Hup!’ which is my signal to start moving (the herd was trained to that sound in the summer). I then ran into the back of the herd.  As soon as I had some movement, I backed off. I continued this action again and again.  After five tries, the first cows tentatively walked across the patch of ice. There was only room for the cows to go single file so I just stood back and waited for the entire herd to cross.

Once the herd was into the next paddock, I patted myself on the back because the rest of the move was going to be a cake walk. I went back to the front of the herd and blew my whistle. Like the well trained animals they are, the herd immediately started bawling and following me. I was once again leading the parade!

Funny how things don’t always go as planned! Just before leaving the paddock to cross the county road, there was another patch of ice. I wasn’t even concerned about it because it was tiny compared to the big patch the herd had already crossed. However, to the cows, it was pretty big!

The herd stalled, then turned around and headed back from whence they came. With cat like reflexes, and cheetah speed, I ran around the herd and stopped their retreat. Once I had them stopped, I began a zig-zag pattern and got them moving toward the gate again. When the lead cows stalled at the ice, I sped up the zig-zag and put the rear cows into a trot. The momentum of their trot pushed the lead cows over the ice, across the road, and into the next paddock. From there, the cows knew where the bale grazing paddock was, and walked the last ½ mile without any more assistance.

Why is this important?

The reason I am sharing this episode is not just to point out specific handling techniques I use. I share it because there was a real economic consequence if I was not able to get the herd back to the planned baled grazing paddock.

At this ranch, we do not put up any feed. We stockpile grass and buy all our hay. Our winter hay supply was delivered last September. It was planned out where we wanted to bale graze, how many bales we were sure would be used, how many bales to put in each row, and then the bales were set out right off the truck.  By doing this, our yardage cost when we bale graze is $0.10/head/day. This is consistent with analysis done by the Ag Department of Saskatchewan.

When using hay from the hay yard, we feed the herd every day. We roll out bales with an older model 95hp tractor and the yardage cost is $0.45/head/day. If I was not able to get the herd back to the bale grazing paddock, we would have been spending an extra $124 per day. Further, if we were unable to go back to grazing for 10 days, the ranch would incur $1,234 of needless expense.

Low stress handling is a great ideal. If our animals come when called, we may think that is low stress handling. Unfortunately, if a person is unable to turn, change speed, and stop their animals, there are missing pieces to the handling puzzle that impact an operation in real economic terms. 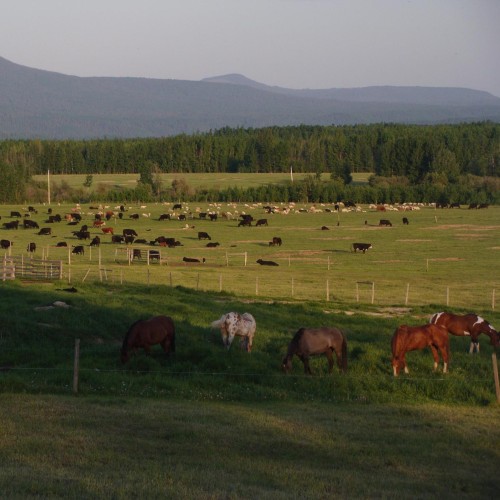