Bale grazing has been increasing in popularity for several years now. This method of feeding minimizes or eliminates the need for running any feeding equipment in the winter months, but is it really all sunshine and roses?

As part of our early efforts in the 1980s to reduce the cost of feeding hay, we developed what we called ‘Spaced-bale feeding’. This was an early version of bale grazing. 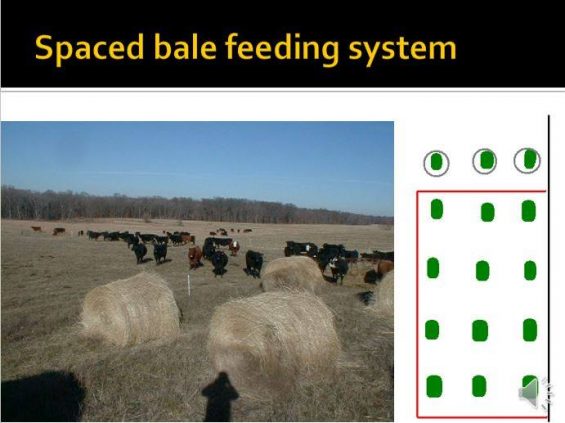 Bales were placed in a feeding block as shown on the right side of the picture. We only handled bales once as they were picked up from the field and put in a feeding block, usually in the same field. Spacing was generally 25-30 ft on centers. The bales were protected with an electric fence and then when it was time to feed, a line of bales was exposed and ring feeders placed on those bales. We manually flipped the feeders each time we fed hay. 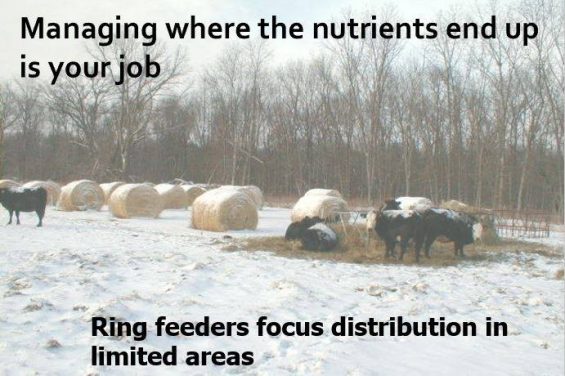 We quickly noticed that while we were enriching the pasture fertility in the feeding area, we were having no effect on increasing P levels away from the feeding block. In fact, they were going down.

Yes, the spaced-bale feeding system allowed us to reduce cost of feeding in the winter but it was mining nutrients from the pasture as a whole and concentrating them around the feeding block. We did relocate the block every year, but they were always placed close to the permanent fence and not scattered all across the pastures. 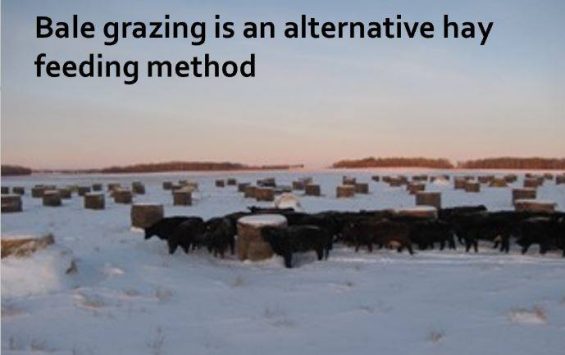 Bale grazing was being done more commonly in Canada by the early 2000s. Ring feeders were done away with because of the difficulty using them in deep snow situations.

An electric fence is moved and a set number of bales were exposed to the cattle. Very often the bales were just left where the baler had dropped them in the summer, so equipment cost was reduced even further.

As more producers bought their needed hay rather than baling it themselves, bale grazing started to trend back towards feeding blocks rather than widely scattered bales across the field where they had been harvested.

Now we can look at the N being returned to the field in those feeding areas using the information shown earlier in this series of posts. 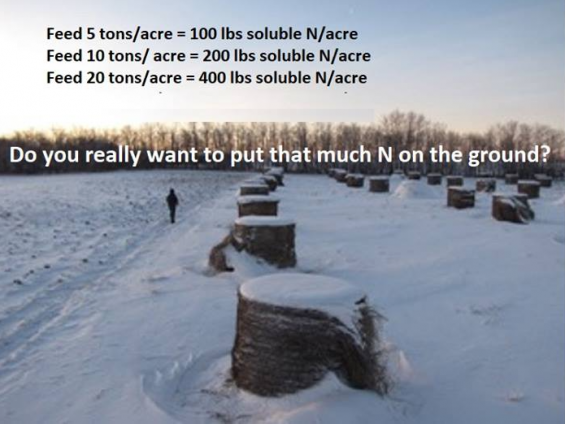 Here is an aerial photo showing where bale grazing took place on a farm the previous winter. We easily see the increased growth where the bales had been fed. The area outlined is one acre. 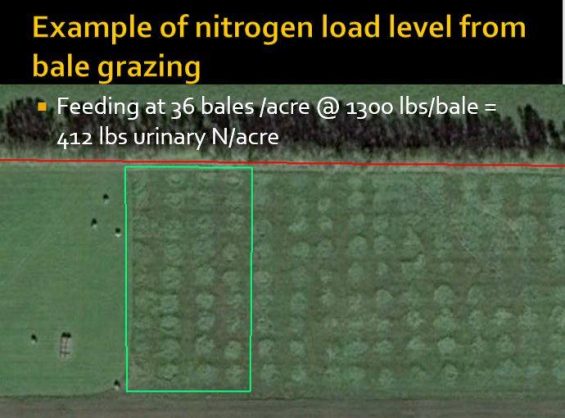 Even if the cows did wander off and urinate in different parts of the pasture, there is likely still at least 300 lbs/acre raining down on the feeding block.

This is where we can end up when we don’t have a feeding plan that balances the feeding rate with the capacity of the soil to absorb and hold N. 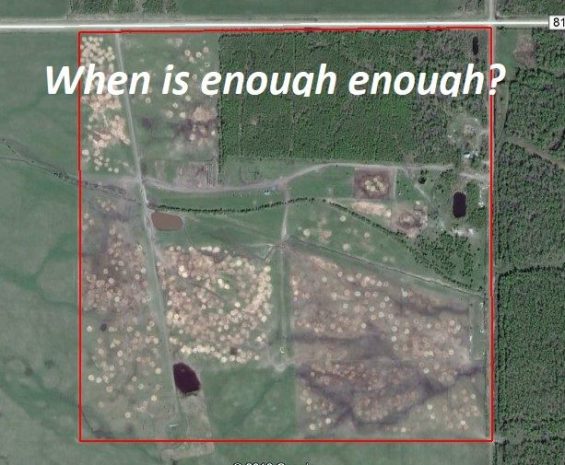 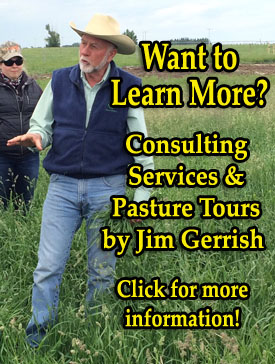 In some parts of the US such as the Chesapeake Bay and Great Lakes watersheds, N overload is a serious issue and regulations are in place to regulate manure application and animal concentration.

It is in everyone’s best interest that we on the land understand the consequences of our decisions. We all need to have nutrient management plans for our farms and ranches – not because the government is going to eventually make all of us do it, but because it makes economic and environmental sense to do so.

Nitrogen is only part of the fertility story. Next week, we’ll look at Phosphorus. If you have questions for Jim, please share them in the comment section below.

NEXT ARTICLE →
Feeding Hay to Improve Your Land – Part 3

Jim Gerrish is the author of "Management-Intensive Grazing: The Grassroots of Grass Farming" and "Kick the Hay Habit: A Practical Guide to Year-around Grazing" and is a popular speaker at conferences around the world. His company, American GrazingLands Services LLC is dedicated to improving the health and sustainable productivity of grazing lands around the world through the use of Management-intensive Grazing practices. They work with small farms, large ranches, government agencies and NGO's to promote economically and environmentally sustainable grazing operations and believe healthy farms and ranches are the basis of healthy communities and healthy consumers. Visit their website to find out more about their consulting services and grazing management tools, including electric fencing, stock water systems, forage seed, and other management tools.

View all articles by Jim Gerrish » 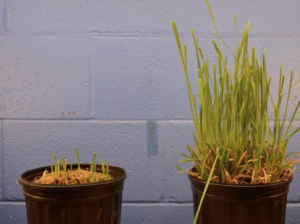 What’s the Impact of Grazing Without Recovery Periods?