Surviving the Naysayers – Part 2 of Thinking Outside the Box

Greg has spent a lot of time thinking and working outside the box. Last week he shared ideas on how you can do it to. This week, he talks about surviving the folks who will laugh at you for stepping out.

I’ve watched farmers do the same thing for 40-50 years and all they do is complain about not making money farming each year. That is the definition of insanity. You cannot expect a different result if you do the same thing every year.

One of the things that seems to keep folks from changing the way they do things is a lack of humbleness. You absolutely have to be humble to be able to accept change in your life as a good thing. You have to willing to accept that what you are doing may be wrong or there may be a better way of doing things. This is a tough thing to overcome, accepting the idea that what you did for years was not the best way to do things around the farm. Just let it go, we all make mistakes every day, but tomorrow is a new day with a clean slate.

To try something new, you will need to be very strong mentally to weather the storm of folks that will be talking behind your back and ridiculing you. People get nervous and anxious when you start doing things different than what they are. You have broken away from the mob circle and they don’t like it one bit. It is their goal to get you back in their circle where everybody feels comfortable as soon as possible. Their circle is made of folks that complain about how bad the markets are, it’s hot outside, we need a rain, to muddy, etc. The pity parties make everybody feel like they are not in this thing alone. Everybody suffers together which makes it seem better. If you’re looking for acceptance in your community, you will probably not get it by thinking outside the box. You must be prepared for this when you start the journey of doing things differently.

Once you hear the ridicule start, just make a mental note to yourself. You must be doing something different or they would not be talking about you. Another important tip to remember is that any time a neighbor tells you that what you’re doing is a good idea, this might be a red flag. Unless you have the right kind of neighbor, you might want to rethink what you’re doing.

If I had been mentally soft, the insults that I received would have made me quit right then. When you’re doing something that is right and it is visibly working out well, don’t stop, ratchet it up. Soon you will be the talk of the whole county. You may get another farm offered to you to lease just by getting the exposure of being different. This is a good thing because you are your own person. You are making a good living and everybody else is just talking about how crazy you are at the local coffee shop.

When we leased our first farm back in 1999, everybody started ridiculing the grazing program on leased land. Nobody around us was leasing land and custom grazing cattle. I had a guy get right in my face and screamed at me that I didn’t have a chance in heck of making a penny in the cattle business. He went on to tell me that I did not own a cow, no land, had no money, heck I did not even own a tractor. Other folks were laughing about how that Judy guy was out there constantly moving those cattle twice a day. “He is absolutely nuts because he is constantly building fence.”

I went to the court house and got the landowners name that bordered my first farm lease. Six months later, we had that farm leased. While everybody was talking about how crazy we were, we just kept leasing idle farms that attached to our present leased farms. Jan and I worked hard developing the new idle farms for many years. Fence and water systems were installed along with more livestock being grazed. Today we have 16 farms in a five mile circle. Guess what? Most of the neighbors still think we are nuts because we do things differently.

When we ran pigs with our cow mob to help bust up the cow manure, we were the hottest news at the local coffee shops. I am surprised we did not cause a few traffic wrecks on the busy highway that passes one of our farms. I mean people just freaked out. It was worth running the pigs with the cows just to see the look on people’s face. I will never forget the tour bus that brought a group of cattle producers to our farm for a tour of our operation. This was one of those really fancy buses that had tinted windows and the driver wore a fancy suit! The driver warned me that he better not put a scratch on his bus driving up our driveway.

When the driver arrived on the farm, he released his air shocks to lower the bus down so that people could get off. All the men and woman were dressed pretty darn fancy for a farm tour. The dresses and shoes were not from Walmart! Once everybody was unloaded, I opened the gate to the pasture where the mob was grazing to let everyone enter. Immediately the woman started screaming and hopping around, he’s got pigs in with the cows.

The pigs were super friendly and wanted to meet their new guests. They came running up grunting and sniffing toward the group. Every pigs face was covered in green runny cow manure. All you could see was their eyes popping through the runny manure. Some of the men even freaked out a little bit. Most of the woman were at a dead run in their dresses toward the pasture gate with the pigs following them. It was a great scene watching the pigs scurrying after the ladies all the way to the bus door. The bus driver was not amused at the pigs sniffing around on the exterior of his fancy non-scratched bus.

See how much fun you can have thinking outside the box?

Yes! I Can Help!
Facebook
Twitter
Pinterest
WhatsApp
Previous article
Thinking Outside the Box Can Be Fun and Profitable
Next article
Water Development for Effective Grazing 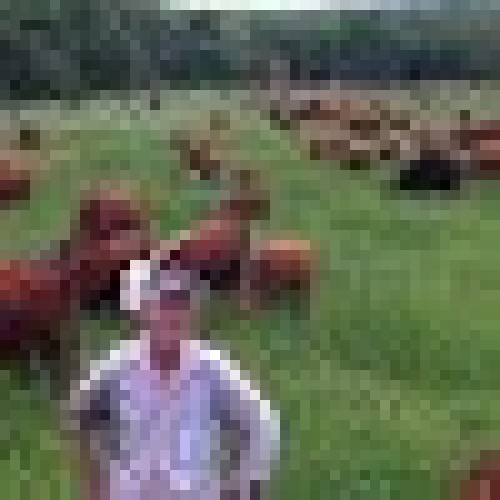