Note from Kathy: These are just three of the ten grass-finishing myths that will Greg will be covering in the Introductory/Overview session of the upcoming online Pasture-Finished Beef Workshop August 11-13 from 7-9PM ET. This is going to be a great workshop, covering topics important to anyone trying to finish beef on pasture. It will cover forages and grazing management, cattle selection, supplementation, winter management and marketing and processing.  Everyone is welcome to attend and it’s free. Click here to learn more and register.

Many people still believe that it’s possible to finish cattle on pasture in 18-22 months. I believe that this mythological target has been perpetuated by misinformation by so-called “experts” and by embarrassment on the producer-side for being well below what appears to be an achievable benchmark. We as grass-finishers, hear that everyone else is finishing their animals in 18-22 months. If it’s taking us 24-34 months to get a well-finished animal, we are probably going to think we are well below where we should be. It is hard to challenge this paradigm and risk other people thinking we are borderline incompetent. As a result, the myth continues.

How did this 18-22 month finishing timeframe come about? What is it based on? One of the first years I worked as an extension specialist I was part of an inter-disciplinary group that was trying to determine a production system that could efficiently finish cattle on grass here in Kentucky. We came up with a system (on paper) that we would reach 1150 lbs by 18 months. We told our constituents that finishing in18 months was possible with the right forages and the right management.

The 7-8 of us academics on the team had never actually finished an animal. We were cattle specialists, forage specialists, and an agricultural economist (me). In hindsight, we did not take into account compensatory gain, having non-implanted cattle, and cherry-picking gains that probably were not realistic for prolonged periods. But boy, was I proud to be part of a team that finished a steer on paper in 18 months! We were part of the so-called experts that were perpetuating the 18-22 month finishing myth.

Another reason I believe we have this benchmark is that most animals on real farms are probably harvested in that 18-22 month timeframe. Not many of us asked what “finished” meant for these animals. Was it in fact a High-Select or Low-Choice marbling grade, or did most of the animals barely reach Standard? I would bet just about anything that the vast majority had little to no marbling.

Then there are the individuals that state either at conferences or in print that they are finishing in 22 months and averaging 2 lbs/day gain on their finishing animals. In just about every case where I have been able to follow up with these individuals their stories fall apart. In one case, the 2 lbs per day turned out to be 1.4 lbs per day (which by the way is a very respectable average from weaning to finish that includes winter gains). In another instance, at a conference, when I informed the presenter that his 22 month finish timeframe meant his animals were ready in February and March (in Idaho) based on his calving season, he was well, speechless. The numbers, or in this case seasons, rarely add up.

Table 1 shows the overall gains needed, as well as examples of what those gains might translate to both during the grazing and winter seasons to finish at a certain age. It assumes a 1250 lb finish weight and 550 lb weaning weight at 8 months. It also provides examples of when these animals would be ready based on birth month. Finishing in 18 months would require an overall gain of 2.3 lbs/day from weaning to finish. This might translate to 2.7 lbs/day during the grazing season (Apr-Nov) and 1.5 lbs/day during the winter season (Dec-March). I have never met anyone that could come close to those gains for an entire grazing season on perennial pasture or get 1.5 lbs/day during the winter on stored forage without supplementation. Finishing in 22 months would require, as mentioned previously, that the animals be finished in late winter for a spring calving herd, while reaching some incredible gains both during the grazing season and winter.

The only systems I’ve seen where animals were well-finished in this 18-22 month timeframe is when they were grazing annuals during the entire post-weaning period. They were getting decent marbling but, even here, they had steer carcasses in the 600-650 lb range. For maximum profit on medium-framed steers, I like to see at least 700 lb hanging weights, with 750 lbs carcasses preferred. You will not find these sized carcasses on many 18-22 month grass-finished animals.

Is endophyte-infected tall fescue an ideal forage for finishing cattle? No. Can you learn to work around its limitations and have well-finished animals with superb flavor? Yes, and I have been doing just that for nine years on a real farm (after I switched from paper-finishing). Well over 50% of our officially USDA graded carcasses have been Low-Choice or higher.

There is no debate that infected KY 31 fescue will reduce gains, particularly in the heat of summer. University research comparing pure infected KY 31 fescue stands with novel or endophyte free fescue typically show reductions of around .5 lbs/day with the infected fescue. So, if you have a near pure fescue stand, I would not advise trying to finish cattle on it, nor would I advise running cows on it. However, a pasture that some diversity, for example 40% fescue, 20% clover, 10% bluegrass, 10% johnsongrass, 5% orchardgrass, 10% forbs that cattle will eat, and 5% forbs the cattle won’t eat will work just fine for finishing cattle, provided you have good grazing management. Clover is generally thought to be the key at reducing the effects of the endophyte but any diversity in forage will be beneficial. Red clover has been found recently to at least partially counteract the effects of endophyte: it opens up the blood vessels that the endophyte constricts. This may be why so many grass farmers in fescue country have relied on red clover as their primary legume and companion to tall fescue: they have found over the years that the combination works well with good performance.

Pure or nearly pure fescue pastures are generally found on 1) mismanaged farms, or 2) University research stations where they are conducting experiments that have little in common with real world situations. There is absolutely no doubt that the fescue endophyte has a negative effect on cattle and essentially acts as a toxin. As with most toxins, there is a threshold level where there are no negative effects. Above this threshold point, the negative effects start, small at first, but then slowly ramp up until they reach near-exponential level (meaning a small increase in endophyte has a large negative effect). Your job is to keep the diet from fescue low enough to keep those negative effects to low and acceptable levels. The more fescue there is in your pasture, the more selective the diet will need to be for the cattle. Your other alternative is to kill out the fescue and replant. Will that be cost effective? It depends on how poor your current management is, how performance is currently being effected, and who is paying the bill. The seed companies will be quite happy if you choose to replant. By the way, who do you think is paying for most of the 100% infected fescue stand study comparisons? I generally have a healthy dose of skepticism when someone is making a sales pitch.

One of the topics that comes up at in almost every pasture-finishing presentation is the need for special genetics for finishing cattle on grass. The theory goes that we have adapted our genetics to the feedlot environment, and since this has been going on for over half a century, we have lost the genetics to finish well on grass.

While I will not disagree that genetics are an important component of any pasture-finishing system, it’s possible that the genetics most people are starting with could be good enough to have well-finished animals as long as they’re in a good finishing system. If you are starting with a cow-herd that historically has relied on supplementation during the summer or winter then it may likely you’ll need to alter your genetics. The calves from that herd may be poor gainers on an all-forage diet.

That does not mean that a change in genetics won’t pay. But it does mean you would want to be very careful before making changes. Farmers that are getting started with finishing cattle and are having problems will too often blame their genetics. Most of the time management is usually to blame, or the finishing system. If they are harvesting animals on perennial pastures at 18 months with 550 lb carcasses and little to no marbling, genetics is most likely not the problem. It’s their expectations and finishing system that are at fault (see Myth #1). Genetics are definitely important, but from my experience, too many people spent too much time focused on genetics and not enough time on improving their management and planning an overall finishing system that allows their current genetics to reach their full potential. I will take excellent management combined with good genetics over the best genetics combined with mediocre management every time.

Can you find genetics that will take you from 30% of your animals being Low-Choice to 40%? Probably, but how much will that increase be worth to you, and could you get those same results cheaper by changing your management rather than the genetics? Where I personally feel genetic dollars are usually better spent are on improving meat yields. You can have a range of meat yields on different 1250 lb steers from 450-525 lbs with the same cutting instructions. How much more would it be worth pushing your average meat yields up from 475 to 500 lbs, or from 500 to 525 lbs?

Whatever you do about potential genetic improvements, do not let that take focus away from improvements in management. Management improvements will usually yield the biggest bang for the buck.

Register for the upcoming Pasture-Finished Beef Workshops where Greg will be sharing 7 more myths of grass finishing. It’s free!

Yes! I Can Help!
Facebook
Twitter
Pinterest
WhatsApp
Previous article
Rancher Loren Poncia Talks Covid-19 and a Shift to Direct-to-Consumer Sales
Next article
When Have You Been Your Happiest? 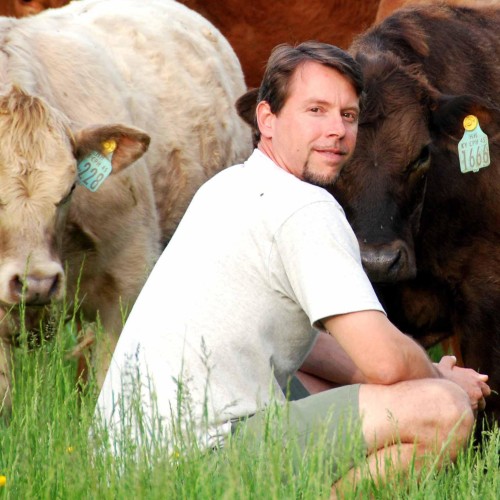 Greg Halich, PhDhttp://www2.ca.uky.edu/agecon/index.php?p=169
Greg Halich is an Associate Extension Professor at the University of Kentucky in the department of Agricultural Economics. He works extensively with profitability evaluation and improvement in livestock and forages, with a particular focus on the analysis of grazing systems, extended season grazing, and grass-finished beef production. Outside of his official work duties, he raises stocker cattle and produces pasture-finished beef for direct sale near Lexington Kentucky, and is in a partnership that raises sheep and custom grazes beef cattle in upstate New York where he is originally from.