Spring and fall are wonderful times to be a grass farmer. The weather is pleasant, the livestock are fat and happy, and the forages are lush.

But of course, summer comes right after spring, and the lean, dry times can wipe away the memory of those beautiful lush grasses of spring.

It doesn’t take much observation to note that many summers, trees will stay lush and green long after pastures have gone dry and brown. That’s due to a couple factors, including the deep roots of trees, and the fact that groups of trees will create their own cooler, more humid microclimates that conserve water for much longer.

If you’re running short on forages and have a patch of trees, there’s always the option of felling the nearest grove of oaks or maples for a one-time influx of feed. This is, however, not a great strategy for the long run. A better approach is to start thinking strategically about using woody species in our grazing systems to systematically see us through the summer slump. While none of your neighbors may do so yet, managing trees for fodder has been done for millennia by people around the globe. Here we’ll look at what others have learned, and what we might use in our own context.

If you’ve ever taken a tour through the Netherlands or Belgium, you’ll likely have noted a strange looking tree creature that’s common along canals, in pastures and in front yards. Looking like a severed tree stump with a bad hair day, pollarded willows, poplars, oaks, linden and more are a centuries-old tradition in Europe. Since medieval times these thoughtfully managed trees have allowed farmers to grow fuelwood, construction materials and fodder in the same pastures as sheep and cattle.

Pollarding is the act of cutting a tree back, above browse height, with the intent of promoting new growth. Far from hastening the death of trees, this can in fact stretch out their lifetimes. Willows are known for being fast-growing, short-lived species, but when systematically pollarded, they are kept in a young, actively growing state and are never allowed to reach their peak and deteriorate. Thus, a tree that would usually live for just 30-50 years might grow for well over 100 years.

To establish a pollard tree for fodder, you’ll have to first get it up above browse height and protect the base for the initial years. You can read here about just how to get a tree established in an active pasture. Once the tree has grown past browse height, you’ll cut the top off during the dormant season. Cut it off at 6-7’ to keep the regrowth well above browse height, yet within your reach. After that initial cut is established, a flush of new growth will appear from the cut site the season after, and that’ll be the place you’ll continue to cut from going forward.

The big benefit of using pollards above browse height is that it allows you full control over when your livestock access the fodder, while not needing to fence the livestock off of the trees. The downside is that giving access to that fodder will require your labor to physically cut the branches to make them available. Such a setup can work for certain farms, like where the grazier spends a lot of time in the pasture with the stock but would be too time-consuming for others.

The alternative to pollarding is what’s called coppice. It’s the same principle of cutting a tree over and over at the same level, but coppicing cuts the tree back to the ground. It’s the difference between a self-serve buffet and you having to bring the food to your livestock’s table. The only work for you is to control access to the browse.

One of the very few examples I’ve seen of this method in use in temperate climates is a trial in the Netherlands. There, willows and alders were planted in rows 80’ apart in an existing dairy pasture. Livestock were thus provided with windbreak and shade, as well as supplemental feed. The report says that leaf fodder intake was low, but that the tree leaves were high in micronutrients that were otherwise lacking in the grasses consumed by the livestock. In the meantime, soil organic matter increased, as did soil biology. The full report can be found here. Sheep and goats would make more full use of the browse, and other tree species (like the more palatable mulberry or poplar) could be chosen to increase fodder intake from cattle, but this serves at least as a valuable snapshot of what is possible.

Other than allowing livestock to browse whatever trees and shrubs have grown up in a pasture or hedgerow, using woody plants as browse is uncommon for sure in the United States. It certainly is not something that is being done in any systematic way, yet. (For Greg Judy’s take on using autumn olive, a nitrogen fixing shrub, look here. )

The tropics tell a different story. There, what is called intensive silvopasture has been gaining traction in the past decades as a means of boosting livestock production. There, nitrogen-fixing trees and shrubs are planted at really high densities (several thousand per acre) to serve as a major feed source. Yield increases can be downright impressive, as studies have shown a 2 to 6-fold increase in stocking density, and an increase of meat production per acre by 2 to 10 times. You can find the original review here, and a great summary of intensive silvopasture here.

Whether the results from the tropics could be duplicated in temperate climates is an open question, given the major differences in climate, plant physiology, etc. We know that a well-crafted tree and shrub systems can provide valuable browse during the summer slump, extra nitrogen injected into the soil, shelter from winds during the winter, and shade during the summer. What we don’t know yet is how much benefit we can get from such a system, what species will work best in our climate, and how best to get them established. Be sure I will be researching each of those, and I hope others will experiment as well, sharing their results along the way. We simply won’t know how far we can push regenerative grazing until we try.

Yes! I Can Help!
Facebook
Twitter
Pinterest
WhatsApp
Previous article
Grazing Through Drought, Too Much Rain, and Fire
Next article
Why Do We Believe Cows Prefer Grass? 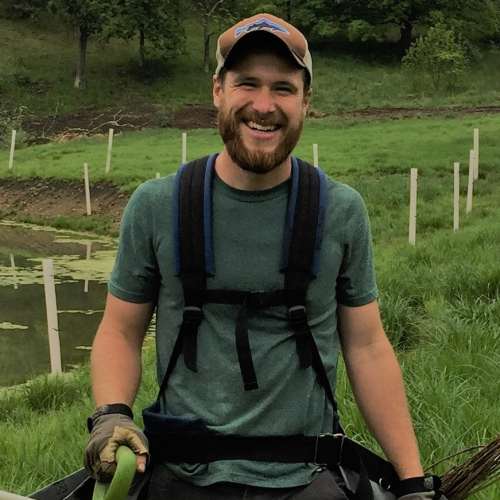 Austin Unruh
Austin started Crow & Berry Land Management (CrowAndBerry.com) in 2017 with the goal of helping landowners do conservation that was also profitable. He started with streamside buffers in southeastern Pennsylvania, and when a client asked how to plant trees in his pastures, Austin started down a rabbit hole that just keeps getting longer and longer. TreesForGraziers.com and his current work in silvopasture is the outworking of that journey. When not planting trees he's probably reading about trees, though he's learned to avoid good tree books right before bed, or he'll lay awake half the night thinking. If not reading about trees, a good afternoon is swimming in the pond and eating wild berries with his growing family.