In December we introduced you to Jonathan and Maryann Connor, owners of Providence Dairy in Addison, Vermont who are making the move to pasture-based dairying. Even if you’re not a dairy grazier there are some hints here about grant assistance that could work for your operation. Jonathan, Maryann are working with Cheryl Cesario, a Grazing Outreach Specialist with the University of Vermont Extension in Middlebury and are sharing their experience to help others considering this transition, and just as importantly, to get suggestions and feedback from the On Pasture Community.

Since this has been a year of low milk prices and because grazing is a very new concept, Jonathan and Maryann Connor decided to start their grazing adventure conservatively to minimize risk. We had three fields near the barn to work with – two hay fields and one corn field, totaling 46 acres.

This area would provide the herd of 90 milking cows approximately 30% of their daily dry matter intake from pasture. Cows would graze either days or nights only and move to a new paddock after each turn out. From a planning standpoint, it was pretty straightforward – nice big rectangular fields; no hills, streams, or ledge to contend with; and the farm is on town water. We were able to plan for a cow lane right up the center, between the fields so animals could exit to paddocks on either side.

We were also able to write in for 46 acres of ‘prescribed grazing’ payments. Prescribed grazing is another NRCS term which basically is an incentive payment for moving the cows on pasture, and is tiered based on intensity of movement. The more frequently animals are moved, the higher the rate. The payment is made each year for three years, as long as the producer documents their grazing management and doesn’t overgraze the pastures.

Initially, when Jonathan was going to sign up for NRCS cover crop practices, he didn’t realize money was available for grazing practices. “That made it more attractive,” he says. Although paid in flat fees per practice, NRCS cost share funding is generally considered to cover roughly 75% of the actual practice costs, with the farmer putting in the balance. However, it is possible for a farmer to lower their portion of the cost share by seeking out bids for jobs and finding a contractor who can come closest to the flat fee (and most importantly, do the job to strict NRCS specifications). As an example, Jonathan’s portion of the laneway cost worked out to 21% of the total based on the contractor he hired. As an added bonus, the timing of the NRCS contract was such that we were able to capitalize on the availability of a ‘Dairy Improvement Grant’ through the Connor’s milk buyer, the St. Albans Co-op. These grants were made available to help farmers implement water quality improvement projects to meet pending state water quality regulations. This matching grant provided the Connors additional funds to be put towards their grazing infrastructure.

The Connors grazing project was approved and funded by NRCS in late summer. Jonathan and Maryann then moved quickly. An excavation contractor was hired for the laneways and a fence contractor was hired for the high tensile fence installation. The jobs were completed by mid-September. Additionally, Jonathan had to remove several hundred feet of old barbed wire along the adjacent heifer pasture, which he chipped away at this fall. He also ordered all his polywire, posts, reels, and float valves from Kencove; purchased his pipeline from a plumbing supply company and laid it all out; and got the water tubs at a local farm supply store. The fence contractor supplied a new 24-joule energizer, which gives the Connors room for growth when they expand their grazing system down the road. (Did you catch that I said ‘when’, not ‘if’?)

These pictures of the before and after laneway and barn exit give you an idea of the work that was done:

So once all this was in, it was late October. With some mild weather, Jonathan and Maryann were ready to go and made the brave decision to turn out some dry cows. This was mostly to test out the new infrastructure, since with our severe drought this summer, there was not too much new growth out there. They set up the polywire and then opened the door for 14 dry cows to exit the barn and proceed down the lane, making a 90 degree turn to get to the desired pasture. By the time Jonathan and Maryann got the last dry cow out, the other 13 had decided to forgo the turn and head straight through the polywire. One cow caught the polywire strand with her foot and proceeded to drag it with her as she walked. I’m sure many readers are nodding in agreement right now. (You didn’t expect it would go perfectly, did you?)

Jonathan says at that point they decided to go in the house for breakfast. However, when they came back out, they were pleasantly surprised that all but one cow were where they intended them to be. Once the 14th cow was into the correct paddock, the girls respected the polywire from then on, as they rotated around a bit on the pasture, grazing for 10 more days or so. Jonathan says next year when he turns out the milkers for the first time, he will set up the first paddock right behind the barn so they only have to walk straight. It’s always good to have a plan.

Click here for the next article, where we focus on forage species on the farm and plans to increase diversity and establish new stands.

Yes! I Can Help!
Facebook
Twitter
Pinterest
WhatsApp
Previous article
Changes to CRP Program Make it Easier to Transfer Land to the Next Generation
Next article
Frosty the Snowman: Friend or Foe 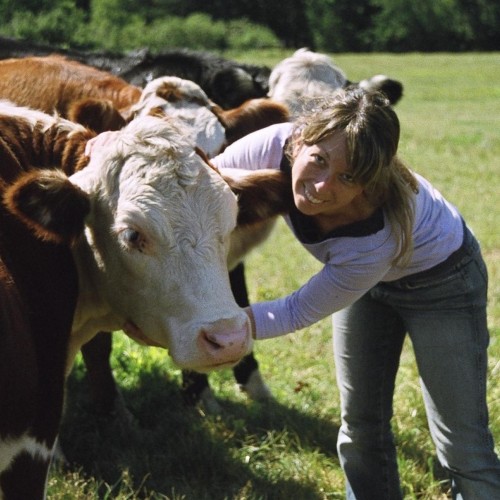